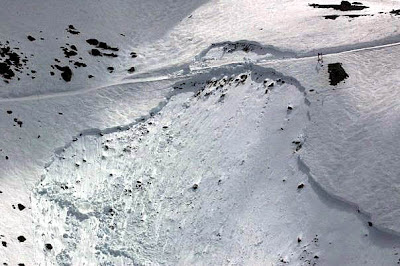 It would appear we are in the midst of a large natural avalanche cycle. Due to extreme heat and deep weaknesses in the snowpack 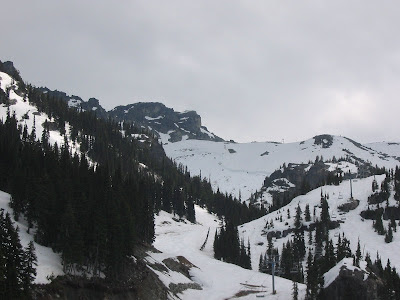 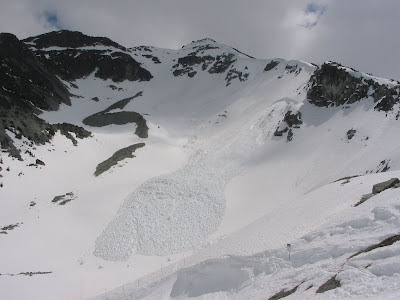 A mostly isothermal snowpack is being stressed by very warm temperatures. Little if any overnight crust recovery will alternate with very high freezing levels and may begining to stress deep istabilities in the snowpack. All these pictures are natural avalanche's. The December layer has awoken beware! 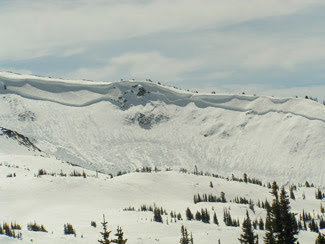 A large natural cornice triggered size 2-3 avalanche off lower diesie ridge during the warming on the weekend. Possibly sliding on the Dec 3-4 rain layer. Temperatures yesterday reached +12.5 c at 2300m.

Also other reports of south facing slopes going isothermal and sliding to ground. 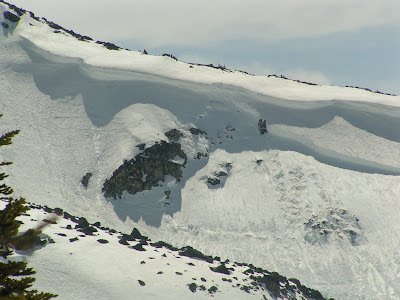 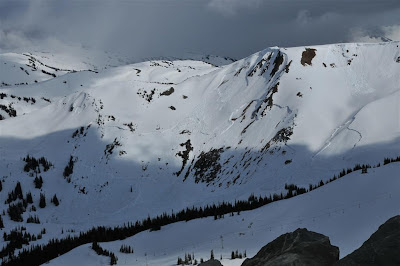 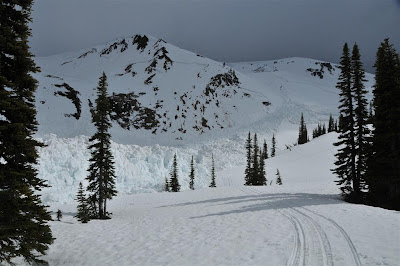 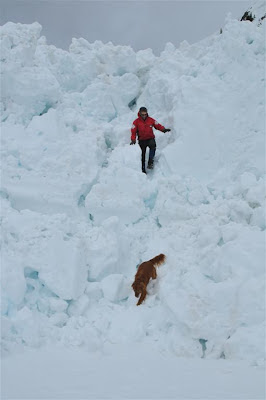 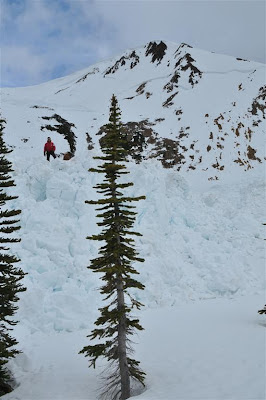 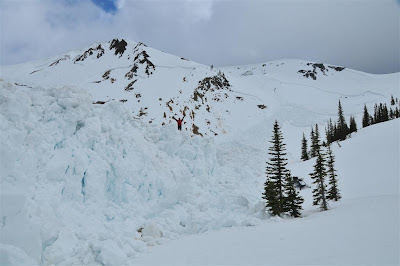 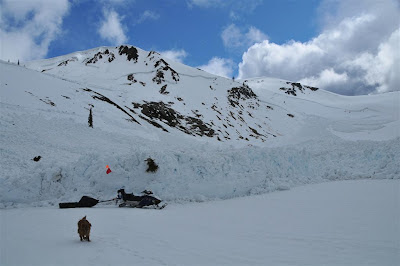 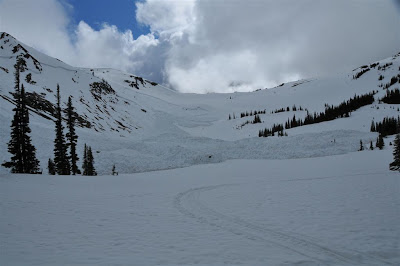 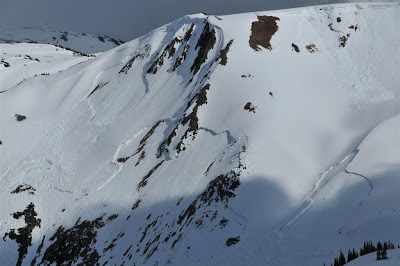 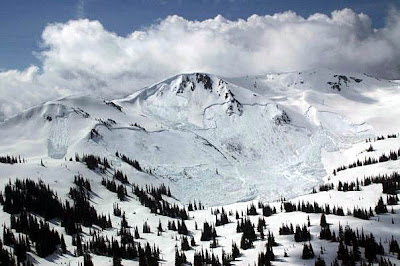 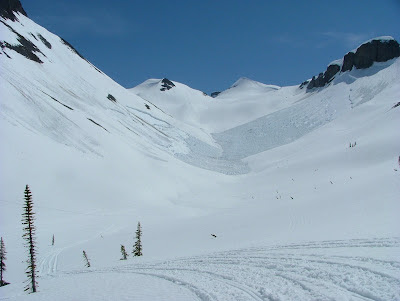 May 14, 2008. The Canadian Avalanche Centre (CAC) is issuing a “heads
up” warning for anyone planning a mountain backcountry outing in Alberta or BC this coming weekend. The forecast dramatic rise in temperature, combined with the unusual
amount of snow that still remains in the mountains, may result in significant avalanche activity.

“We are well past our normal operating season and still talking about the danger of
avalanches,” says John Kelly, Operations Manager at the CAC. “This poses some big
problems for us at the avalanche centre because we have no current data about conditions,making it impossible to give specific targeted advice. However, we do know the basic ingredients are out there for a significant avalanche cycle.”

There are three key factors that make this situation unusual.
o This year’s snowpack is fundamentally unstable, with many deeply buried weak layers. In some areas the base of the snowpack remains extremely fragile, comprised of sugary snow with very little strength.
o A cold spring has kept the surface layers solid and strong, and preserved the weakness below. This creates prime conditions for slab avalanches, which are the most destructive type.
o The sudden hot weather we are expecting this weekend will melt the surface layers, and will trigger some large avalanches.

The CAC advises anyone travelling in avalanche terrain this weekend to leave a wide
margin of safety. Everyone in the party should be equipped with safety gear and be
familiar with how to use it.

A warning this long weekend snow bridges will become weak as well as potential for sizable cornice fall in the backcountry with temperatures rising toward 30c valley bottom, freezing levels are forecast to be above 4200m. 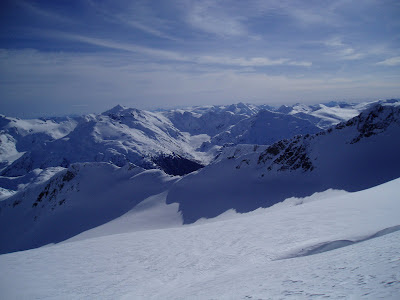 Ripsaw Glacier
Whistler Search and Rescue are advising people who are ski-touring glaciers in the backcountry to keep themselves roped together after a crevasse rescue Sunday.

At around 12:30 p.m. a 26-year-old B.C. woman crashed through a snow bridge on the Spearhead Traverse and fell nine metres into a bergschrund crevasse where she became lodged.

The group was luckily within cell-phone range and her two male companions called 911 and a rescue got underway immediately. Nine rescuers went to the area in two helicopters.
Ripsaw Glacier and the usual high route where the snowbridge collapsed

Fortunately the weather was good and the woman was uninjured, all of which helped the rescue have a happy ending.

But said Whistler SAR manager Brad Sills, during the course of the rescue it became clear that, while the party was well equipped and in good physical shape, none of them had a rope.

Indeed two more ski touring groups on the same path who stopped to help were also not roped together and without ropes.

The basic rule is that anytime you are on a glacier you should be roped. Unfortunately in the Whistler area people have not been doing that and so we are reminding people that when they are traveling on glaciers they should be roped.

This rescue could have turned sour if anything had delayed SAR or if bad weather rolled in.

The woman was finally pulled to safety around 3:45 p.m.
The snow bridge collapsed because the snow it was rotten and she fell through 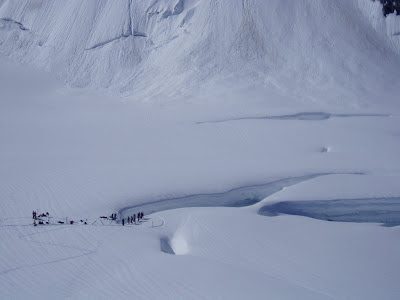 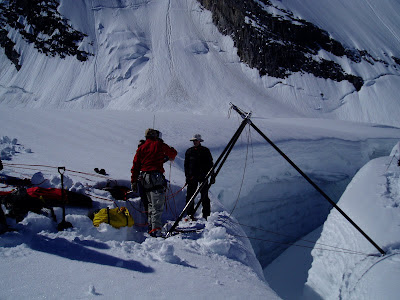 
A video about a skier in a hole