The Canadian Avalanche Centre (CAC) is issuing a special public
avalanche warning for the South Coast Mountains from north of Pemberton to Squamish and Hope, the Columbia Mountains from Prince George to the US border and the North Rockies area from Mackenzie and Hudson Hope to the Kakwa provincial park. This warning goes into effect on Friday March 20 and extends through the weekend. The areas of concern are the uncontrolled backcountry mountain areas of the South Coast, Kootenay Boundary, South Columbia, North Columbia and the North Rockies.
Recent snow and rain has once again brought the snowpack to a tipping point with the potential for snowmobilers and backcountry skiers to trigger avalanches during their activities. Where and when an avalanche will occur is difficult to predict and this makes it hard for recreational backcountry users to plan their activities. “Under conditions like these people using the backcountry must leave an extra margin safety. This means selecting the terrain you use according to the current avalanche danger for your region,” says John Kelly, Operations
Manager for the Canadian Avalanche Centre.
Backcountry users need to be alerted to a high number of recent close calls in several areas of the province. A common theme is travellers letting their guard down. “I know it seems like there is a special warning every weekend”, continues Kelly, “it’s just that kind of year, second in a row, with a bad snowpack. So we have to keep the reminders pumping out. The tricky avalanche conditions are not going away.”
The Canadian Avalanche Centre has noted a disturbing trend in snowmobile fatalities with 13 of 19 avalanche deaths in Western Canada coming from the snowmobile user group. While avalanche deaths among backcountry skiers are on a declining trend, snowmobile fatalities are sharply up over the past two years. “We have to look ahead and prevent the next avalanche accident,” says Kelly. “So I have to say rather urgently that snowmobilers need to do two things before heading into avalanche terrain. Train yourself to properly master avalanche rescue gear –that means an avalanche transceiver, collapsible probe and shovel. Second, read the avalanche
bulletin and adjust your objective to fit with the primary avalanche concerns of the day.”
The CAC and partner public avalanche bulletins are your best source of information for snowpack conditions and backcountry travel advice. Check www.avalanche.ca/bulletins for up‐to‐date information and the avalanche hazard rating for your area before making backcountry travel plans. 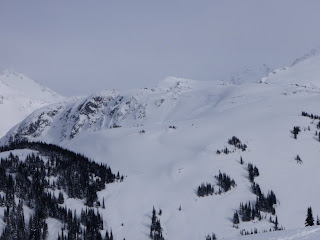 Russet ridge with a large crown at the top Sunday 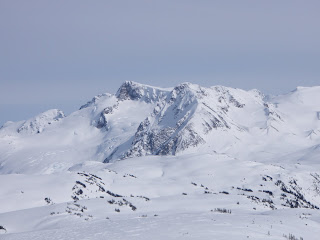 Recent Avalanches near Whistler crown visible on Fissle Peak in shadow
Posted by Whistler Search and Rescue Society at 3/21/2009 11:37:00 AM No comments: 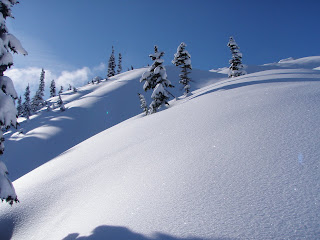 Persistent weak layers in the snowpack.

PWLs have been largely dormant in the recent dry spell and this has produced high confidence in people who may not realize that we've had quite a bit of new snow this week 47cm total around Whistler.

-Observations from around the valley include several instances of at least class 3 activity, even remotely in some cases. Feb 27 there were several large avalanches on the east aspect of Rainbow running class 3.5-4 and taking out other sympathetic pockets with it, and running far down the valley. Another north aspect had released around rocks unsupported and ran class 3. A group of heli skiers remotely released a 2.5 which triggered two other class 3's.

-even when PWLs are dormant, the occasional large and highly destructive avalanche is common

The most common weather factors that prod a dormant PWL are solar radiation, loading by wind or new snow, rain, and warm temperatures. Even if these factors do not trigger a deeply buried PWL directly, they often trigger cornice failures or smaller surface avalanches, which then step down to the deep PWLs. These avalanches are probably not survival able. So think about that before jumping into big lines even if you skiied it last week.

Be carefully out there things are waking up and are priming for deep triggering with additional loading.
Posted by Whistler Search and Rescue Society at 3/06/2009 07:00:00 PM No comments: