Avalanche hazard remains a very real concern still despite a slowly strengthening snowpack. Although the probability of triggering the weak layer of facets deeper in the snowpack is declining, the consequences of triggering remain high; if triggered, this layer continues to produce large, widely propagating avalanches. The weakness extends pretty much from SE Alaska all the way to Utah through the coast and interior ranges.

Deep Slab: It is still possible to trigger the December 6 facet/crust combo and the ensuing avalanche could be very large with potentially serious consequences. (Big chunks of hard slab the size of cars with you in the middle) This layer is beginning to show signs of strengthening which is a good sign, but it also makes it harder to predict if or where it could be triggered.

Practice good safe-travel techniques and choose terrain with options to reduce your risk. Your best bet for decent riding is in sheltered north-facing glades where the snow remains cold.

All though far from Whistler worth noting is a fatal accident in Montana recently on Jan 18, 2009.

Snow depths at the accident site were highly variable; however, faceted snow crystals at or near the ground have been found on all aspects in this area. 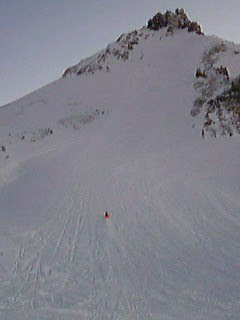 The slope had been seriously tracked up before the slide occurred 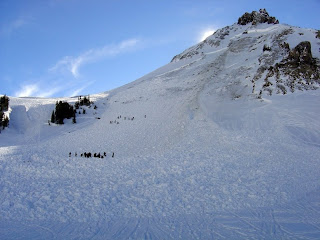 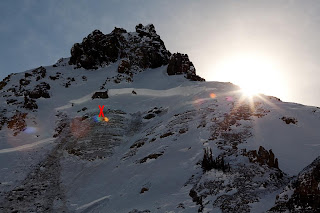 The victim was climbing a steep, north northeast facing slope on Crown Butte when he got stuck. While working to free his sled, it began tumbling down the slope. It tumbled 3-4 times before impacting a rock 50-100 ft below him. The slope then fractured about 75 ft above him. The resulting avalanche was estimated to be 300 ft wide and 1000 ft vertical. The crown height ranged from 2 ft to 15 ft, and the run out angle was 28 degrees. Link-->>

-Expose only one rider at a time on a slope, and don't stop in terrain traps. By stopping this one behavior we’d see avalanche fatalities plummet. Don't go and help your buddy unstick his sled at the top of their high mark you may be putting your own life at risk, and may be just the trigger the slope needs.

-Carry rescue gear and know how to use it, and make sure your buddy is capable of effecting your rescue. There’s nothing worse than going to an accident scene and finding someone dead from a shallow burial where a transceiver may have saved their life. In addition airbag backpacks are now available in Canada, and are worth looking into if your a serious enthusiast, statistics out of Europe suggest they greatly increase your chances of survival should you be caught.
Snowpulse backpacks
ABS backpacks


-Carry a Sat phone, or PLB. These devices will greatly assist you should you need outside help. Digital only cellular coverage is available in the general Whistler /Pemberton valley area only.

Whistler SAR has PLB capacity and a receiver to home in on signals. The PLB must be registered, and sends signals directly to the nearest Rescue co-ordination center.(Victoria) It sends accurate GPS cordinates and also emits a homing frequency for local teams to pinpoint you position.
PLB 406Mhz

Allthough not as effective as a PLB this device sends a message via Satellite to a Texas monitoring center it will give approximate GPS co-ordinates.
Spot me beacon

-Avalanches are a matter of timing. There are certain times when the snow pack is stable and others when it’s quite unstable. Be patient and wait for things to stabilize. The most obvious signs of instability being recent avalanche activity , make sure you stop and look around for obvious clues.

-Access to the Garibaldi park should be checked with local ski patrol for current access routes.
Posted by Whistler Search and Rescue Society at 1/22/2009 08:29:00 PM No comments:

A special bulliten has been issued by the Canadian Avalanche assoiciation concerning the fragility of this seasons snowpack after two seperate fatal accidents in out of bounds area's beyond the ski area boundry sign.

The current snowpack is unstable and unusual for the South Coast. Due to the presence of persistent weak layers, the conditions will not improve as quickly as we are used to on the coast. Don't let the fresh snow and brief periods of sunshine lure you into typical big slopes and steep chutes.

It's important to be patient and make conservative terrain choices for the time being.

Most avalanche professionals are "tiptoeing around", and many long time locals have said it's also a very "toucy and abnormal snowpack, and haven't seen anything like it in 30 years" and avoiding avalanche terrain alltogether, and this is certainly a warranted approach at least as this avalanche cycle peaks towards Sunday / Monday when conditions could easily go to extreme hazard when a large storm approaches.

The snowpack could be described as a mousetrap ready to snap. It might get your leg or your head.

Stick to simple, low-angle, slopes in the trees that are well away from avalanche paths and runouts.

It may be possible to trigger avalanches in areas that see infrequent activity, and also remote triggering is possible. Exercise extra caution and give yourself a wide margin of safety.

We are expecting conditions to rapidly deteriorate again on Saturday night with the arrival of an intense frontal system.

A special avalanche warning has been issued for the South Coast beginning on Thursday, January 1 until Monday, January 5. We are urging backcountry users to be very conservative in their decision-making at this time.

If you are not comfortable assessing avalanche conditions then you should consider enjoying the new snow in-bounds at a ski area.
Posted by Whistler Search and Rescue Society at 1/01/2009 07:33:00 PM No comments: