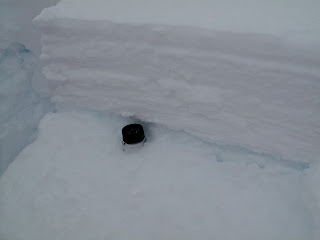 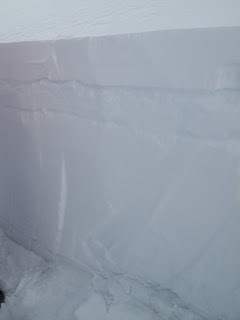 Thanks to Tony Sittlinger, for this information and pictures from a recent trip to the Blackcomb Glacier.
Thanks Wayne for the links
For more up to date conditions

Most recent report from the high alpine

We did two ECT's. We got an ECTH on the first column under the November 5(?)crust.
We got an ECTN on the second test. There was a steep TG through the obvious crust sandwich at the top of the pit wall, and we saw clearly
striated and square facet crystals under the upper crust layer which varied
from 1-3cm's in thickness. This November facet crust area is likely to get
weaker with the forecast temperatures expected over the next few days. The temperature on the surface was -10, while the temperature below these two crusts was -4, with the TG concentrated through the crust sandwich.
Tony

And don't forget what happened last year around this time!

We are dealing with a complex and somewhat unusual snowpack for the South Coast. Around Whistler there are several different persistent weak layer deep in the snowpack including a layer of depth hoar right near the base of the snowpack and at least two distinct crust/facet combinations between 50-100cm above the ground. Recent storms have dumped up to 200cm of snow on top of the weak underlying snowpack. This new load resulted in many large avalanches during the storm and several large to very large human or explosive triggered avalanches shortly after the storm. Keep in mind that rain followed by cooler temperatures have helped to stabilize the snowpack at and below treeline. The greatest concern is with slopes above 1900m that have not recently avalanched. This is not the classic coastal instability where you can charge hard a few days after the storm. Be patient and realize that a large avalanche may become more difficult to trigger over time, but the consequences of a deep release could be devastating.
Posted by Whistler Search and Rescue Society at 11/12/2012 09:39:00 AM No comments: